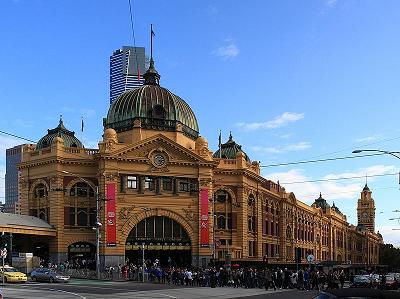 Southern Cross is the major transport hub in Melbourne.
– The train station is the terminus of trains to Sydney and Adelaide
– Trains to regional cities such as Ballarat, Bendigo and Geelong
– The coach terminal is next to the station under the shopping centre
– Express buses link Southern Cross with Melbourne Airport 24/7
– The shopping centre includes 100 shops, bars and restaurants
– The Etihad Stadium sporting arena is close by (500m)

This is the central station for the suburban train network. Over 100.000 people use Flinders Street Station each day. It’s located on the corner of Flinders Street and Swanston street. The Customer Information Centre is open daily from 7.00 – 19.30. Cafes, eateries are located on the concourse; ATM’s are around the train station. Melbourne’s public transport network is divided into two fare zones. Zone 1 covers the CBD and most inner suburbs of metropolitan Melbourne.