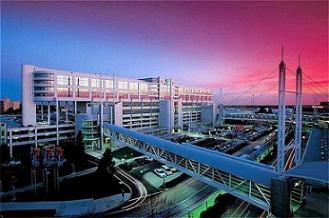 Melbourne Airport is the main airport and is 23 km from the city center. It has many domestic traffic and international flights to Asia, Africa, Europe and North-America.

Melbourne Airport transportation
There is no train service from the city centre to the airport. The main transportation to the airport is the express bus. The express buses operate 24/7 including all public holidays. Buses run every 10 minutes in the day. Tickets are sold at the bus stop. Fare for an adult is AUD16 one way – return ticket is AUD 26. A taxi to the city is AUD 80.

Avalon Airport is an airport in Victoria with budget flights. It’s located 55 km from the Melbourne Central Business District. To Geelong’s CBD is about 20 km.